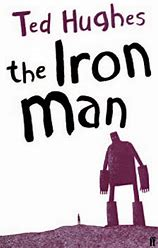 Next morning all the farmers were shouting with anger. Where were their tractors? Their earth-diggers? Their ploughs? Their harrows? From every farm in the region, all the steel and iron farm machinery had gone. Where to? Who has stolen it all?

There was another clue.

From farm to farm, over the soft soil of the fields, went giant footprints, each one the size of a single bed. The farmers, in a frightened, silent, amazed crowd, followed the footprints. And at every farm the footprints visited, all the metal machinery had disappeared.

And all the way down the cliff were torn marks on the rocks, where a huge iron body had slid down.

Below, the tide was in. The grey, empty, moving tide. The Iron Man had gone back into the sea.

Think back to yesterday's PowerPoint - a key feature of a newspaper is its headline. 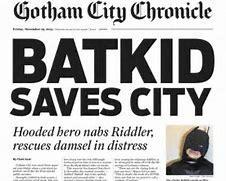 Work through the 'Headlines with puns and alliteration' activity.